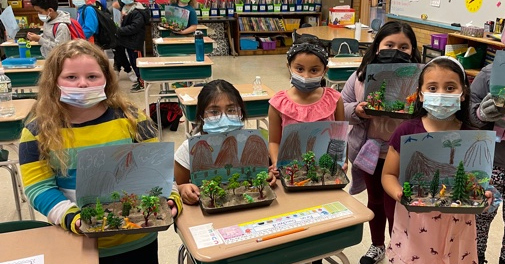 The program began this October for second graders and spanned over seven weeks with roughly two weeks at each elementary school. In total, 89 second-graders signed up for the program from the district’s six elementary schools: Forest, Seth Haley, Edith Mackrille, Alma Pagels, Savin Rock, and Washington. The unit for second graders focused on dinosaurs, in which the students read a book on them, did a research project on them, and wrote a persuasive essay to their parents about why they should have a dinosaur.

Elisa Rice, a fifth-grade teacher at Carrigan Intermediate School, oversees the program. “I am very pleased with the success of the second-grade enrichment program,” said Rice. “The students really seemed to enjoy it, and I am looking forward to our third and fourth-grade programs. I believe that the word is spreading about how great a program it is since we have even more students signed up for the third grade than we did for the second.”

The third-grade enrichment program, which has 104 students signed up, will begin on January 3rd while the fourth-grade program is scheduled to begin on April 18th. Both grades will focus on push-pull forces using Legos. Every two students will share a Lego kit and each student will write about their project in their journal.

Buses are provided for the after-school enrichment program as well as snacks. The program is an hour-long.